What is the health information model (IM) and what is its purpose?

The IM is a representation of the meaning and structure of data held in the electronic records of the health and social care sector, together with libraries of query, value sets, concept sets, data set definitions and mappings.

The main purpose is to bridge the chasm that exists between highly technical digital representations and plain language so that when questions are asked of data, a lay person could use plain language without prior knowledge of the underlying models.

The model consists of classes, sets and objects that are instances of classes. 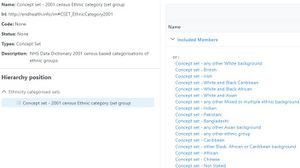 Objects can act as objects in their own rights (e.g. an instance of chest pain) or may also act as classes (e.g. the class of objects that are chest pain). Likewise sets have members that are objects and the objects may also act as classes or sets. For example a set for the 2011 Ethnicity census will contain a member object of "British" which is also a set with members such as English and so on.

The model itself is stored as an RDF based knowledge graph, which means it is implementable in any mainstream Graph database technology. There are no vendor specific extensions to RDF.

In line with the RDF standard, all persistent types, classes, , property identifiers and object value identifiers are uniquely named using international resource identifiers. In most cases the identifiers are externally provided (e.g. Snomed-CT identifiers) whilst in others that have been created for a particular model. Organisations that author elements of the models use their own identifiers.

From a data modelling perspective the arrangements of types may be referred to as archetypes, which are conceptually similar to FHIR profiles. In the semantic web world they would be considered "shapes". There are an unlimited number of these which frees the model from any particular conventional relational database schema. Inheritance of types is supported which enables broad classifications of types and re-usability.

The variation between the parts of the model that model terminology concepts and those that model data use slightly different grammars in keeping with their different purposes. The information model language describes the differences.

The semantic web approach is adopted for the purposes of identifiers and grammar. In this approach, data can be described via the use of a plain language grammar consisting of a subject, a predicate, and an object; A triple, with an additional context referred to as a graph or RDF data set. The theory is that all health data can be described in this way (with predicates being extended to include functions).

However, the semantic web languages are highly complex and a set of more pragmatic approaches are taken for the more specialised structures.

In addition to semantic web languages, other commonly used languages are in place are used to enable the model to be accessed by more people.. For example the Snomed-CT expression constraint language is a common way of defining concept sets. ECL is logically equivalent to a closed world query on an open world OWL ontology. The IM language uses the semantic language of SPARQL together with entailment to model ECL but ECL can be exported or used as input as an alternative.