Data is complex, and getting data from data is even more complex.

In order to answer questions relating to this vast pool of data, it is necessary to extract some data and transform it into a form that can be used to provide the answer. This is query.

A different approach is needed for at least a proportion of the other 99%. The usual approach is to use an application that enables mere mortals to build queries. Most of these query applications build the query definitions using some form of underlying language for example DAX or M. These languages tend to be tailored towards the needs of the application and the underlying data formats.

This is the purpose of the health query language.

The world’s store of digital data can be considered as a graph of nodes and connections. Properties and relationships form the connections and the objects form the nodes.

Thus the query language is merely some additional vocabulary that indicates the processes that a query should follow and the data model the query should operate on.

A model of a query (which is the definition of a query) is a graph structured in a way that conforms to a number of shapes or (classes) . An application that helps a user construct a query would result in a conformant query graph and a conformant query graph would be used as the source for the display. The query graph would be used as the source to generate the run time query syntax, itself probably generated from query templates e.g. SPARQL query templates.

In Resolution, the approach taken towards this query involves the generation of a result graph (or target graph) from a source data graph via a series of step. An actual data set is then produced in any form the user wishes e.g. Relational files or database.

The result graph contains data from the source graph but may also contain newly created nodes and connections generated by functions..

To model the generation of a graph from a graph it is necessary to describe a set of instructions as to what the resulting graph should contain, and from what parts of the source graph the result graph is generated from, and what manipulation on the source data is needed.

A small graph is normally easy to understand. For example, the fact that a patient had a consultation with a doctor is easy to visualize as 3 nodes and two connections. As follows: 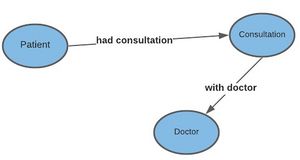 A 3 node representation of a consultation

The problem arises when things get complex, and most questions have a degree of complexity that creates challenges when using plain language to describe.

This is relatively unambiguous and complete. However, it’s a bit tricky to interpret. This logic can be presented in a number of different ways, all meaning the same thing. For example, it could also be presented as:

A way of eliminating the need for deep understanding and mental “subquery” is required.

Take the above two narratives as a starting point. There are clearly several steps needed in order to simplify. The logic is complex because if a patient left and came back after 2019 and left again they should still be included.

Furthermore, they may also have been registered in other practices so this needs to be checked also.

The totality of the steps appear more complex than the initial statement but more properly reflects the logic.

The step approach can be illustrated as follows. This is a textual form example, but could also be diagrammatic

Step 1 gets any patient registered with a GP in London

Step 3 Keep only patients from step 2 if their latest status was left before 2019.

The above logic, being mapped to the query model can then be interpreted to a standard query language. In this example SPARQL is used but could be SQL

The query model classes, as all classes can be, can be modelled in graph , using SHACL. A visualisation of these classes could be

Some health care queries such as the above example, imply the use of derived tables (SQL) or subqueries. In the above example "latest" means latest for that patient which means that for every patient, events must be sorted and ordered with the most recent selected.

There are several ways of doing this, and this can get more complex when the request is for the latest 2.

The approach taken is to extend the model to include these functions and map them to templates built from the query languages. For example: Step 2 looks for and adds in the latest registration status for these patients noting only those statuses in London practices

This would be developed as a SPARQL template with the interpreter using a function to pass in the triples, the grouping and function.

One of the advantages of a logical model abstracted from the run time is that the run time queries can be optimised.

In the above example, the 4 steps could be combined into a single query by extracting the intersections and the subquery.

This can occur independently of the query definition which can remain static. Likewise different techniques can be used for different purposes such as Window functions in SQL.