Family relationships, and none professional relationships between people, are included in the common information model in two main ways:

As with the common information model in general, the two are related to each other so an enquirer can build sophisticated relationship queries and advanced family trees.

Example of a relationship. The related person {Mary} is both the mother of {Fred}, and the Sister of {Helen}. 'is mother of' is modelled as an inverse property of 'has mother'..

Relationships appear complex to model because of the ambiguous way the terms are used in plain language.

By building up simple family tree relations (parent, child etc), it is possible both to deduce relations, and relationships, including the relations that people struggle to remember.  Most people would struggle with understanding who their third cousins were, yet they are genetically quite close. A third cousin is defined as a child of one's parent's second cousin, or perhaps more precisely, a great grandchild of a great grandparent's sibling! Anyone capable of remembering this, is probably a genealogist.

Thus it is possible to deduce that Mary is a mother and a sister simply by noting the relationship as part of a family tree. 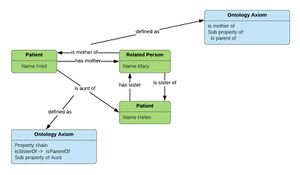 Example of a property chain. (is sister of -> is mother of) is a subproperty of> is aunt of.

Relations are more complex when chained together. Common parlance is to use an abbreviated term to name a once removed relationship. In the above example, Helen is an Aunt to Fred. Once again the ontology defines this by the use of property chains.