The Discovery attribute based access control language is presented as a pragmatic JSON based profile of the XACML language, modified to use the information model query language (SPARQL) to define policy rules. ABAC attributes are defined in the semantic ontology in the same way as all other classes and properties.

The language is used to support some of the data access authorisation processes as described in the specification - Identity, authentication and authorisation .

This article specifies the scope of the language , the grammar and the syntax, together with examples. Whilst presented as a JSON syntax, in line with other components of the information modelling language, the syntax can also be accessed via the ABAC xml schema which includes the baseline Information model XSD schemaon the Endeavour GitHub, and example content viewed in the information manager data files folder

Scope of ABAC language and approach

The language is designed to support a conversation between a client application and a policy decision point, with an intermediary; the policy enforcement point, brokering the exchange. The purpose of the conversation is to ascertain whether the client has permission to access a function and resource. 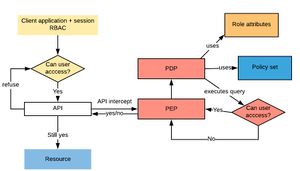 The conversations are constrained, consisting of a request, an assessment followed by a decision, and a response.

The flow is as follows:

Requests are also constrained. ABAC specialises in requests for access to some function or some data in order to perform some action. Requests are assessed in the context of the characteristics of the request, the requester, and a policy which is stored in the Policy information point (PIP). Responses are simply permit, deny, not relevant or indeterminate, with perhaps some obligations or advice associated with the response.

There is no assumption within the language as to the infrastructure or the physical separation of concerns between the client, the PEP, or the PDP. In practice, a PEP may be a component within an application and a PDP may be implemented in process also, although it is recommended that a PDP is implemented as a server accessed via REST API.

It is strongly recommended that readers of this specification familiarise themselves with ABAC and have an overall understanding of the main concepts in XACML.

In line with the rest of the information language, the ABAC language consists of a small number of tokens (reserved words), referencing the vocabulary of attributes and value types via the ontology. Much of the ABAC rule language is dispensed with as being replaced by SPARQL ASK clauses which are in effect Graph matching clauses consistent with all other IM query. 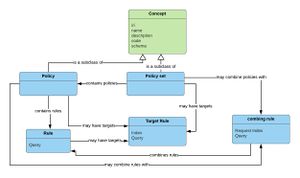 A set of classes represent the language of policies. Each class name is also a token in the language. Some of the classes are modelled as concept structures and thus inherit the main concept property of IRI, name description.

Each business related property of each class is also a token.

Attributes identifiers and value identifiers are pragmatically modelled as IRIs in the semantic ontology and are used in the objects at run time, therefore are not inherently tokens.

The main classes are illustrated in the diagram on the right.

Syntax as a language

The language is represented here in BNF notation with terminals in ' '. non terminals in bold face,zero or more as { }, zero or one as [ ], alternatives as '|' and descriptions in italics

iri := an iri either as a full iri or an abbreviated iri where namespace prefixes are declared by the PIP

AttributeType: Any object property or data property from the semantic ontology

DataType:= 'DataType' Any data type from the semantic ontology

The following table documents the tokens

Attributes and how they are defined

Attributes are properties and values describing subjects, resources, actions and the environment. Attributes are modelled in the common information model ontology like any other property such as health record property. Consequently, they also share the same semantic definitions. This allows ABAC attributes to be treated like any other e.g. query, subsumption query, data storage.

To take matter one step further, it is also important that the designers of application functionality understands the attributes that the ABAC policy uses to determine permissions. If an application is going to make a request for access using attributes of the subject or resource then they must match. The information model enables that exchange to take place without the need to map between the application and the PDP attributes. More specifically, it is the PEP context manager that would normally perform this mapping, but in Discovery, the attributes directly match.

a) Use of some of the elements as language tokens i.e. JSON names. For example PolicySet, Subject,Target.

b) Optimising the use of the graph paradigm to represent run time objects and attributes i.e. triples. e.g. {"abac:AuthenticationLevel" :"TwoFactorAuthentication"}

The ability of JSON to nest triples means that JSON can be used in a conventional manner, but projected as triples for query. Property paths in query can use the SPARQL property path syntax to query the request and policy objects using a standard approach.

A mixed approach can be used. For example the Target class, although used as a rule, can use JSON nested objects rather than SPARQL property paths, which enables simple JSON indexing such as Lucene to find the relevant policies.

The example supports scenario 3 in the working example in the main authorisation topic.

Example 1 - Dashboard access to some but not all providers

Consider a user, logged on , in role and authenticated with two factors and having accessed Discovery explorer and is currently operating in the context of two projects in the user's session. The user has a role type of GP principal at the Ravenglass Railway medical Centre. The following JSON represents some of the current user in role attributes that will be relevant to the request.

Each of these attributes are object or data property IRIs from the IM ontology. Where the property values are objects, the objects may also have an IRI representing the type of object (class of object) from the information model. In this case for example, the IM Class ":CM_GeneralPractionerPrincipal" is modelled as a subclass.

The user is logged on to Discovery Explorer and is seeking to access the North East London Dashboards. The NEL dashboards have a resource identifier, which the application knows about. Neither the application nor the user details know whether these dashboards can be accessed by this user or perhaps even the user type. A request is issued, listing some attributes of the user in role and the fact that the NEL dashboard access is requested.

The data controllers have agreed that a senior general practitioner can access NEL dashboards, generally without restriction. However, they are limited to certain practices for practice level data, whereas for the rest of the country they can access only regional level. This is tricky logic requiring a particular query in the reporting database to filter for certain practices being displayed. However, the problem is not the function, it is whether the user MUST use the function in the first place.

A policy is designed to match the dashboard request to a certain functional constraints for Senior clinicians.

The target element states that this policy is relevant to any subject that has a role assigning them to a healthcare provider.

It imposes an obligation on the application to make sure that the function "intra regional filter" is applied with an argument of "STP".

It should be noted that the policy refers to health care providers and Aggregate Reports as classes. Furthermore the health care provider class is a value of the "has organisation type" property of the role organisation. Yet the request was specific about the organisation id and the NEL dashboard resource id. This takes advantage of the ontology which can use class definitions to define a set of objects. In the example the GP practice would have had a property of organisation type whose value would be a subclass of healthcare provider (e.g. General Practice). The NEL dashboard resource would have been assigned as an instance of aggregate reports. Thus the use of subsumption testing would result in a positive match.

This example has no complex rule. the example demonstrates that in exchanging request data, the application designer mus have some knowledge of the profile policies and the policy author must have some knowledge of the application functionality. In other words, whilst the ABAC language is a common language it does not in itself preclude the need for a common understanding between the separate concerns.